MY AMAZING COUSIN, Natalie Hart, had a link to an article about a murder trial and the victim's family giving the media treats. It's a good read and well-written column.

The only thing I don't like is the timing.

Here's the story - an Ontario man was murdered and two defendants are on trial. It started Feb. 1 and has obviously been tedious. The family of the victim is Dutch, and they gave media members covering the trial the infamous Dutch dropjes, or salted licorice.

The reactions were priceless. Dropjes are acquired tastes. And if you ain't Dutch, you ain't much, especially when it comes to puckering up with a double salted dropje. 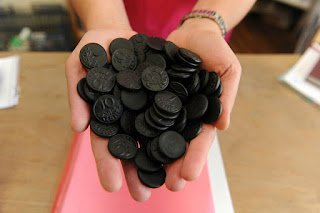 The author of the column mentions how she has become close with the family of the defendant. This is normal. It happened to me a lot in my dozen years of covering crime and courts for The Whig. Not long ago a family that had to go through a horrendous experience in Missouri came to the store to shop, and we got caught up. It felt good to know they still remembered me and The Whig's fair coverage of a very difficult time.

The author calls herself a "crime, court and social justice columnist," whatever that means. I suppose you can have an editorial slant, but that's a dangerous thing to do when a trial is taking place.

Look. A dirtball is a dirtball, and families are unwitting and innocent victims in a grinding and often unfair system. If you spend a lot of time with them, you may become close. It's human nature. You may even root for the outcome, obvious as it may be, or otherwise.

But to me, if I'm going to write about it, I have to stay detached during the proceedings. It reeks of "Oh look at me in the middle of this thing." Just my opinion. When it's said and done, you can opine.

Still, it's a good column and certainly human nature prevails, even at the darkest and most dreary of times.

And it's enhanced by Dutch licorice.