AS USUAL, DOWNTOWN Quincy will be a beehive of activity Saturday. We have the Dogwood Parade in the morning, the first Farmer's Market of the year, and a really cool event at the Washington Theater. 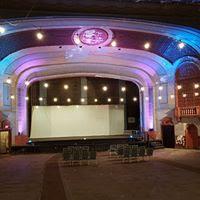 The Washington Theater Dogwood Concert starts at 1 p.m. I'm amazed at the number of people in Quincy who don't know about the Washington Theater. Many were in it as kids years ago and they don't realize how rundown it got, and the efforts to restore it. From the front, the theater doesn't look like much, but it's massive inside because it slops down into the ground - you can get a better idea by looking at it from the back in the alley.

We have four acoustic acts playing Saturday, including myself. The thing I love about the old theater is the amazing acoustics and the way the sound bounces around in there. There's no charge to attend (but donations are appreciated) and it's a great place to just wander around in and check out.

Redevelopment started around 2003. About that time my old band, The Funions, was contacted to play a few benefit shows in there, and man, did we have a blast. I'm thrilled they continue to work on the theater, and someday it could the the showcase venue in Quincy.

But first things first - come join us this Saturday and check it out for yourself!