NOTE: I just added Avalon by Roxy Music to my top 11. GUH. How did I leave that out?

I WAS CHALLENGED the other day to list 10 albums that were influential and still in the playlist. The problem is that there is no longer a playlist. I rarely listen to albums or CDs or whatever the format is these days. With summer approaching, I might try to conjure up some music on my phone.

So I will try avoid putting all the 70s and 80s music on this list. Of course, the 80s were the best 12 years of my life. By the way, these are in no particular order, except for No. 1. 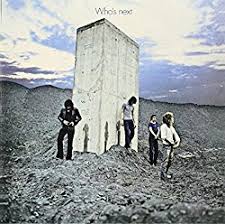 Who's Next, The Who: Not even close. Can still sing every word to every song, feel every whacked out drum beat from Keith Moon, and go crazy trying to figure out Entwistle's bass lines on We Don't Get Fooled Again. And if there's a better road song than Mobile, well, it's never been made.

The Completion Backwards Principle, The Tubes: One of the most underrated and unappreciated American bands from the late 70s and early 80s. Bitter Web warriors who hide behind keyboards and have no idea what they are talking about should be forced to listen to Attack Of The Fifty Foot Woman until they cheer up.

Secret World Live, Peter Gabriel: The film shows a manic genius at the height of his creative talents. Listening to it reveals an incredible band. Digging In The Dirt? Well, Don't Give Up.

Talk, Yes: Lots of Yes albums could make this list - I spent the summer of 1984 listening to The Yes Album, Close To The Edge and Fragile. The more modern 90125 was one of the first cassette tapes I ever bought and devoured. But Talk gets the nod because Trevor Rabin is bleeping man and easily the Mozart and Bach of rock and roll .... every song surges on Talk.

John Hiatt, Walk On: Of course Cry Love is an anthem and should be played by every cover band that ever lived. But I defy you to listen to Dust Down A Country Road and not cry. If you don't, you aren't human.

Keb Mo, Just Like Me: Thank you, Mariann and Jon Barnard, for letting me borrow this CD one day. I don't think I gave it back. Who knew listening to the Delta Blues was so much fun?

Teaser & The Firecat, Cat Stevens: My mother, who passed away 13 years ago yesterday, loved Cat Stevens. She passed it on to me. This is when we used to put these round black things on a device known as a turntable. What were they called again? I'd put this on and pretend to be a leader of a band and bellow out every word from every song, if I knew nobody else was around.

The Outfield, Play Deep: Come on, man. It was the 80s. You had no choice. Those long walks from our old house on the far west side of Mount Pleasant to campus were made bearable by listening to this CD. Got a letter from a mystery man ....

October, U2: I put this on here because it's considered the weakest of the early U2 albums. Really? You didn't listen to Gloria and try to bellow along with Bono as loud as you could?

The Police, Regatta De Blanc. And it would be OK, on any other day ....