I DON'T BELIEVE in ghosts. But lately we've had disappearing scissors issues in Second String Music, and they've magically reappeared, and I think some old banker in this building might be messing with us. 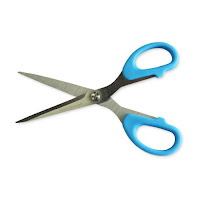 Yesterday morning I said, "Sheryl, where are the scissors?" They usually hang above the workbench in the back of the store. I looked and looked and looked and couldn't find them. Sheryl said, "I don't know, and Steve (Rees) and I have wondered what happened to them, too." So she went over the dollar store and bought two new pairs.

She went to put them on the bench, and lo and behold, one of the missing scissors was hanging right there, on the hook, right in front of us. I swear it wasn't there a few hours earlier. Then Sheryl noticed the other missing pair of scissors was on a back hook behind some other long packages, but again, there is no way they were there earlier. WE SEARCHED THERE.

Theories? A ghost in the machine, like one of the bankers who used to work here. Could be Dr. Glower, who had an office on the third floor. Maybe one of Pamela Bedford's dance studio costume designers was borrowing them. Perhaps Mr. Houston, whose name is still on a fourth-floor office window, was clipping coupons or something - he was a pretty shrewd financial guy.

My guess is that Mr. Wilson, who started a law firm in the building in 1906, was using them to patch a curtain on his former fifth floor office. One of the Schmiedeskamp brothers might have needed scissors for something. The best guess is that Fischer Jewelers, who were on the second floor, snatched them for trimming sales tags off watches and gold rings. The list is endless and still probably not the answer.

Anyway, we now have four pairs of scissors, last I checked. Wait a second .... Sheryl says there are only three hanging back there now.