WE ARE PUTTING another amazing Second String Music store party into the books. What a great time! Amazing jam session with some new blood (thank you Joe Pashka on lap steel) and tons of hooting and hollering to celebrate nine years.

The semi-annual Bedford Beer Can Bowling Tournament was hotly contested as usual. Emerging victorious this year was Scott Mast with 28 points, one more point than The Mighty Adam Yates. 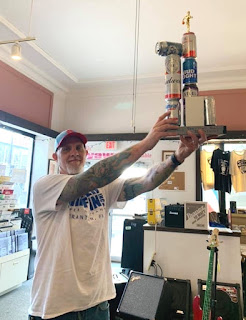 I knocked down all of the pins on my first throw, but then I thought, "You'd better be a gracious host and let somebody else win." Right. So I'm going to claim I deliberately tanked my next two throws. Actually, they were just off, kinda like the guy who threw the ball.

I won't mention his name, but the drummer for HartLyss didn't knock down a single pin. However, he got three bonus points for holding a beverage while throwing. "Yeah, well, I thought it was golf and the low score wins," said Lincoln.

Much appreciation to Adam Yates and Tim Smith for doing a few 1/5 & Maine songs, and for Pete Magliocco and Ted Holt for the raucous crowd. I spent a good chunk of Sunday doing nothing but recover, even though I more or less behaved. I actually made it to church Sunday morning, and it bears repeating that Tom Dickerson finished fourth in the beer can bowling, after attending an elder's meeting for most of the day.

We've put away the trophy until November. Next February is our 10th store anniversary. Maybe we will hire The Who and Roger Waters to really tear it up... As long as Roger and Roger play beer can bowling.