I STARTED DABBLING with the guitar around 40 years ago. It's only taken that long to figure out a C6 guitar chord. Hooray for me!

Most students are interested in technique, learning chords and strumming to songs. Guitar isn't hard to figure out if you have the time and the interest. If you have the passion, it's incredible how much stuff there is to learn. And as long as I teach, I will learn.

When I quit my real job 7 1/2 years ago, I had to buckle down and learn more about scales and fretboard navigation. But my guitar playing didn't really improve until I started studying theory, and that's a recent development.

In the past month I've had several older students ask why things work the way they do. Basically it starts with learning a major scale, then taking the root, third and fifth notes to play a major chord. 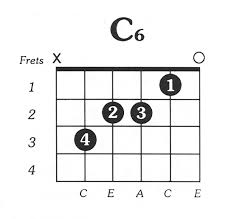 Well, not really. It gets really complicated. And this circle of fifths thing is enough to drive anybody mad. I'm crazy already so maybe it's no big deal.

If you are good at math you can figure out this guitar theory thing. I'm horrible at math. But I'm trying.

We looked at the chord book. And there it was, a C6. Turns out my guess was right. Hooray for the teacher! Maybe he can get a little star next to his name and a ribbon for participating.

It's way cool when the light goes on and it makes sense.

Just how do you play an augmented 7th flat 9th? Hold on, Let me grab my chord book, and then twist my mind into a knot. After all, you never stop learning. Ever.
Posted by Rodney Hart at 10:29 AM