Hiring musical acts on the spot

ONCE AGAIN I missed the meetings and got put in charge of hiring acoustic acts for a bunch of downtown summer events. Q-Fest at the end of June was almost full Saturday afternoon, after I made a bunch of calls and sent out requests for availability.

It never ceases to amaze me when people don't return messages. You snooze, you lose. Anyway, we have another stellar lineup for the event at the end of June in Washington Park, a great mix of some younger unknown acts with people you know and love. We try to avoid hiring the same people every year and to give new faces an opportunity to play in front of people and through a professional sound system.

Saturday afternoon a young woman came into the store looking for a nicer acoustic guitar with a decent pickup. Turns out she's originally from Quincy and lives in Kansas City. She's planning to move back to Quincy in a few months. 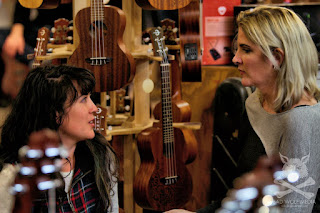 I was curious if she could play and sing, so I asked if she had any videos or songs on social media. Instead, she grabbed a guitar and played and sang an original song. Geesh. The voice of an angel AND she writes her own songs?

I hired her on the spot for the last open spot in Q-Fest.

We are doing the Concerts in the Plaza and Noon Blues shows too, so hopefully, we find a few more new faces and have more great shows downtown.
Posted by Rodney Hart at 10:11 AM