Another guitar blast from the past

ON THE HEELS of getting the Epiphone back in the store (and it sold right away again), Sheryl revived yet again another six-string miracle and memories. 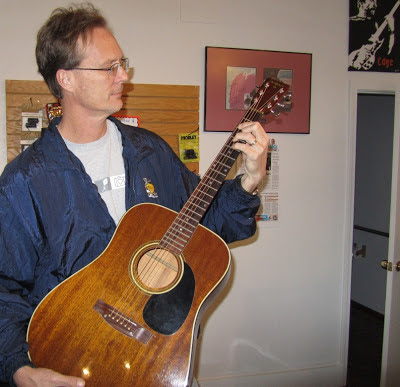 Back in 1984, I bought my first acoustic guitar at Rainbow Music in Grand Rapids, Michigan. I had fooled around with a battered guitar from a friend, and then I landed a job in the Grand Canyon National Park and knew I'd have time to learn.

It's a cheap Lotus. I'm not sure what I paid, $200 maybe, and this guitar was my constant companion through many adventures for the next five or six years.

It sat unplayed for a long time, and then I discovered the saddle was cracked. I took it apart last year and it sat in pieces. Then we couldn't find the replacement saddle. Finally, the universe returned the missing parts and Sheryl started working on it. She took it up to Don Rust in Ursa, and les voila! My Lotus has been restored.

It still needs a neck adjustment and some minor work, but it sounds great and has brought back a rush of memories. Playing it at The Hole, in college, at a few weddings, just getting lost.

People often come in with cheap and battered guitars, wanting to sell or trade them in. Sheryl and I try talking them out of the idea - your first real guitar is a special thing, and you should really hold on to something like that.