THE SUNDAY MORNING fog is a bit thicker right now. But I have an excuse. 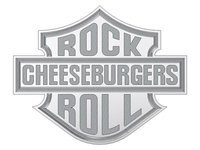 - Not sure what it is about the South Side Boat Club in Keokuk, but every time The Cheeseburgers play there we have an absolute blast. Last night somebody came up with the brilliant plan of celebrating a certain band member's birthday. The band member managed to hang on during the gig (he hopes) but it got a bit out of hand after that. You know it's bad when the drummer is the sober one on the ride home. GUH.

- Our Cheeseburger Roadie of Doom, Frank Haxel, should get a medal of valor for putting up with us. Not only does he get us to and from the gig, he sets stuff up, tears it down and operates the lights. And buys a round of So Co to celebrate birthdays.

- After getting home in the wee hours, I discovered my car wouldn't start (we all meet at the drummer's house to pile in one vehicle for the road trip). Leave it to Frank to come to the rescue again this morning, jumper cables in hand. We'll see if Old Blue turns over later.

- Jeff VanKanegan is leaving the band at the end of the year, and we'll have much more on that later. We've recruited Don VanDyke to replace him on bass, and Don jumped in for a few songs last night. I'm really going to miss Jeff, but new blood is a good thing, and Don is a great fit for our band.

- We are playing at a couple of really cool Christmas parties the next couple of weeks, then get ready for the huge New Year's Eve show. It will be Jeff's swan song and we are also fired up about playing with The Hipnecks, a killer band out of Columbia, Mo.

- We have extended store hours at Second String Music until Christmas and we'll be spending Sunday afternoons at Fifth and Maine. Wamma-lamma-jamma, too, so come on down and hang out. But don't play too loud until the fog clears a bit.