WE ARE HAVING a party tonight at Second String Music to debut the Cheeks McGee "White Christmas" video. More details, click here.

Chris Kelley of Table Sixteen Productions filmed the video Sunday in Washington Park and on the roof of our Fifth and Maine Building. Most of us will never have any idea what goes into making a video production - Chris did this pretty much as a spur of the moment thing, but watching him as he filmed, it was awesome to see his ideas verbalized and you could tell he was already putting the whole thing together in his head.

Chris also shot and produced our awesome store commercial last spring. The guy is amazing. Even if his hair color is, well, interesting.

So. Come on down tonight and we'll watch a video, have some Christmas spirit and just generally have fun. Second String Music has become quite good at hosting parties, both spontaneous and planned.

Mike Sorenson got some awesome pics during the video shoot. I really like this one taken on the roof, which has an incredible view downtown Quincy and the frozen Mississippi River. 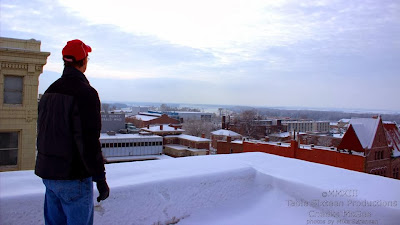