A BIG THANKS to The Mighty One, Adam Yates, who brought these photos to the store yesterday.

I believe these were taken in the early 1960s. They show local law enforcement standing by as Mercantile Bank employees moved across the street. Mercantile owned our building from 1905 until the early 1960s, then moved to the southwest corner of Fifth and Maine, where it still is today.

The far north window on the Fifth Street side appears to have a lower portion with a safety deposit box in it, but otherwise, the building looks pretty much the same. The plaques on either side of the door are gone, of course, and there is some sort of railing by the Maine Street windows, as well. Probably to keep people from leaning on the windows.

At this point I could make a crass remark about how well the po po are doing their jobs in the below pic, but, you know, I like the boys in blue and they've been good to me, and I'm sure they did a very good job on this particular day.

I love the history of this old building. Very cool! 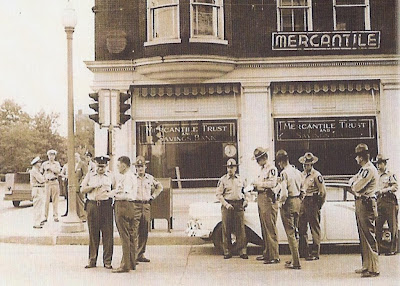