IF YOU DON'T like The Muppets, you are not a happy person. The newest version airs Tuesday nights and you have to watch carefully to catch all the humor - a true mark of comedic genius. Sheryl accidentally watched the first one and we have enjoyed this new take on an old favorite. 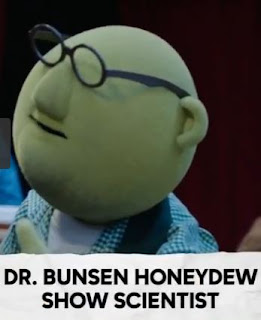 What they really do well is the non-verbal stuff. Watch the clip above of the epic drum-off between Dave Grohl of the Foo Fighters and Animal. When Grohl says something about school being in session, catch the priceless look Animal gives him.

I used to get teased about looking like Beaker from The Muppets. I hated it back then, but now I consider it an honor. My favorite character is the guy with the glasses and no eyeballs. And who doesn't love Kermit The Frog?

About a month ago they showed the band in a van, and when Janis said something about getting paid, Animal said, "What do you mean, we get paid?" I about fell off the couch and I almost cried instead of laugh - truth is comedy, and comedy is life.