FROM THE BOTTOM of our sleep-deprived, over-stimulated and worn out hearts, Sheryl and I thank all of our loyal Second String Music customers and friends for an incredible five-year anniversary store party Saturday. Huge thanks to Mike Sorenson and Bad Wolf Media for the incredible photos.

Much love goes to Adam Yates, who provided the PA system and played his heart out with Prospect Road a night after a gig at One. Gin and Juice? Really? Tim Smith kept the jam session lively, as did Gene Kennedy, Will Leffert, Jim Percy, Adam Kirkpatrick and many others. 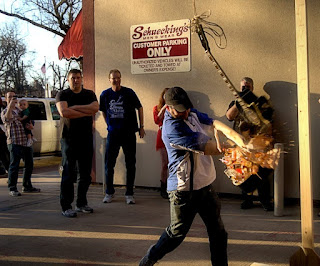 Frank Haxel built the frame for the Guitar Piñata, which was some creative genius, if I must say so myself. Table Sixteen Productions will have some slow-mo video that is spectacular. Steve Pezzella provided the bat. Sheryl and I provided the tiny bottles of liquor. The biggest thrill was seeing Jeff Seivert (brother of the infamous Justin!) smash the piñata with one massive swing of that bat.

Then we had some folks take the stage and I am proud to say we have incredible performers and players here in little old Quincy, Illinois

Jaki Kaufman and Ivan Yantis, you were amazing. Liz Bentley came by before a show in Hannibal (and Sunday at Spirit Knob) and played her heart out with her father, Tom, on percussion.

Tim Smith tore the house down with a huge "Ice Ice Baby" rendition. Cori Lyssy carried some sloppy guitar player for a few songs. Kayla Obert showed up to the party, so we made her get up there and play and she killed it.

Then the Avenue Beat girls rocked our little store stage and it never ceases to amaze me how much better and better and better they get. Let's hope they can remember all the little people who helped them along the way, Sam, Sami and Savana! And the whole "capo moving" thing is disturbing - we need to work on that.

Guess what? Next year, we get to do it again!