I HAVE A bad history when it comes to losing keys. I lost them in the snow a couple of years ago while we shot a Cheeks McGee video in Washington Park. You can actually see me doing a snow angel at the exact time they fell out of my pocket. I found them in the snow a few days later because I knew they were there.

Last week we were leaving the house to come to the store when I couldn't find my keys by the back gate and garage door. I looked and looked and looked. I swore I had them in my hand two seconds before I reached down to put the leash on Angus. Then they weren't in my hand.

The moral of the story? Don't put a leash on Angus. At least that's what he tells me. 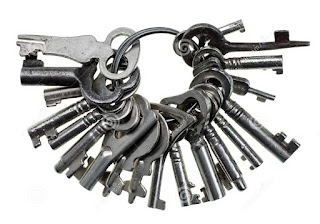 So I went about three days without my keys. Of course Sheryl has a set, and of course she says of all the numerous ridiculous things I do, losing my keys is "among the most ridiculous." Geesh. That is pretty bad.

I knew they were outside somewhere. Then it snowed a day later and the ground was covered and there was no way I was finding them.

On Saturday afternoon, I finished walking the dogs before heading back to the store. I just happened to look down by the garage door. And there they were, with the store key sticking straight up from the ground and the black car button plain as day in the snow.

If keys could talk, they would say, "You are a dumbass. We've been here the whole time. A dog or cat or squirrel could have ate us. Be more careful. Dumbass."

So I have my keys back, and life is easier. Maybe I should get a string and put them around my neck. Or maybe I should just be more careful, in general.

The key to life is to not lose things, it seems.