Don't be trippin' over no petty wound

YOU CAN'T MAKE it up.

Quincy got on the national map last week after an interview by KHQA went viral. It was the number one trending item on my Facebook page Monday. Supposedly it has more than a quarter million views. I'm sure Snoop Dogg will see it and want to make a video.

Watch the interview. It gets better and better every time you cue it up. There isn't much more to say, other than - do you give credit to the young and intrepid reporter for banging on this guy's door at 5 a.m. right after he's been shot? Did she really have to ask him to show the wound? And what exactly is the guy saying? If you want an interview, make sure it happens after the guy has been drinking all night and hopped up on pain meds to treat a hole in his chest, I guess.

In the end you have to give the reporter some credit from not losing her marbles, and keeping it short so the interview didn't completely go off the rails. Same with Chad Douglas - I would have been falling off the chair in disbelief.

Our friend Charlie Martin drew a cartoon, and Devon Hawkins himself apparently liked it so
much he used it for his "song" and video on YouTube. Art is subjective. Rock on, Devon.

Ain't no petty wound, being shot in the chest. 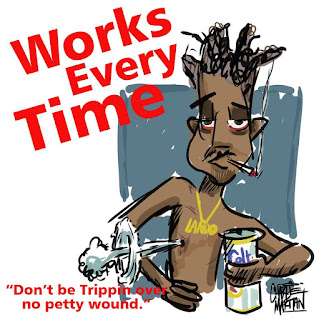