Lew's stash is for sale

IN HONOR OF our friend Lew Portnoy, who passed away last month, Second String Music is having a huge sale on odds and ends for musicians.

Lew's better half, Lois, came to Second String Music yesterday with boxes of stuff. Some of it will be donated to Six String Heroes. But we are selling most of it for Lois, and at super low prices. 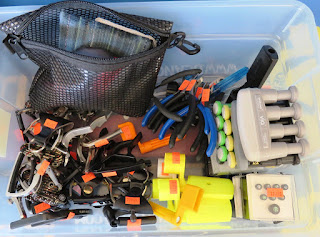 Capos, picks (thousands of picks), shakers, pick holders, bridge pins, slides, finger exercisers, string winders, all kinds of stuff has been priced to sell. Capos are just $3 to $7. Some of the guitar picks you have to see to believe and most of them are just a quarter. And a lot of items never came out of the box.

Lew had a ton of stuff, but he knew where it all was. "He'd just say, 'It's in that bin on the left,'" Lois says, and she would go there and find what he wanted. Genius.

I was going through a box and found some set lists from his bands - it brought a tear to my eye. And Sheryl found an old Second String Music business card from our Eighth and Washington store. Lew had written "Sheryl and Lucky," our first store cat, on the card. He only REALLY came in to see Luckycat but always said hi to the humans too.

We also found tons of Second String Music picks, every version we have ever had. Lew was a frequent guest at the store and obvious music stuff hoarder, and he'd grab a few every time he was here. It added up after a while and finding an old pick from our first location five years later is a thrill.

This stuff will go to good homes. Lew wouldn't have it any other way. Come by and pick up a bargain thank to LewGuns!
Posted by Rodney Hart at 10:04 AM