I KEEP TRACK of some high school buddies via Facebook. The other day, Mark VanderKlipp was watching the Olympics and bemoaned the fact he didn't have a swimmer's body.

Really, who does? Swimming is one of those grueling sports where it takes years of training and dedication. My niece, Natalie, is doing quite well in Arizona and is one of the top swimmers in the state. She spends hours and hours in the pool and obviously has to love it.

Swimmers are great and I respect what they can do, but I bet they never did tomatoes off a speeding boat in Lake Michigan. I say we should make an Olympic sport of it.

This happened one summer in the mid-1980s. I was hanging out with my buddy, David Wilkins, and we headed to a campground near the shores of Lake Michigan somewhere. I distinctly remember Mark and his twin brother, Mike, being there. We piled onto a boat and headed into the water, and somebody said, "TOMATOES!" 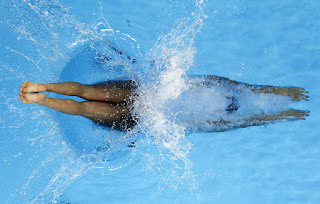 I'd never heard of this. The boat got up to speed and you simply jumped out, hopefully hitting the water at the right angle so you didn't break your neck. Why it was called doing a tomato I will never know - it might have something to do with the whole Dutch repressed Christian Reformed Calvinism thing. That's what I use to pretty much blame everything that happened in the 1980s.

I remember doing it and nearly breaking my neck. You had to jump sideways and enter with your legs straight so you'd plunge directly into the water, not at an angle. I was sore for days after.

Really, this wasn't the smartest thing to do, but hey, we were Dutch and CRC, and some things you just can't help.

Imagine if this was an Olympic sport. "Michael Phelps is going after his seventh medal at the Rio games!" the announcers breathlessly announce. "There he goes! The boat is going 55 miles an hour! He's straight up! He's straight down! No ripple in the water and boom he's at least 30 feet into the water! He's done it! I can't believe I just used another exclamation point!"

Yes, Olympic swimmers are chiseled specimens who do incredible things. But I highly doubt they've ever done tomatoes.

So we have that going for us. Which is nice. And I'm still sore, 30-plus years later.