SATURDAY IS OKTOBERFEST on York Street in front of the Dick Brothers Brewery buildings. This is the fourth year the Quincy Rotary Club has put the event on. The Cheeseburgers played at the first two and had a blast both times. Click here for more info on Saturday's event.

By the way, The Cheeseburgers are playing at One Restaurant Saturday night, and we won't start until 8:30 or 9, so after you get your fill of brats and beer on York, head the half mile north and west to Sixth and Hampshire to continue your rocking good time!

Oktoberfest is a good event because it includes two things you need - beer and a great venue. This is also the one-year anniversary of the legendary "Greg Ellery falling into a window well" episode, truly one of the most epic nights in recent Quincy history.

Before I go any further, let's make it clear that Greg is my brother and I love him to death, and God broke the mold when making Greg. Wait. Did God make G-Dawg? Then God DOES have a sense of humor. Phew. 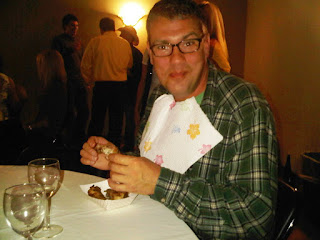 So last year Greg shows up at Oktoberfest ready and raring to go. He had that demented gleam in his eye. I have seen it a few times. You simply get out of his way, let him double-fist it and get it on, then stand back and try not to die of laughter.

I regret not staying longer that night. Not long after we left, the event closed down, but Greg was nowhere to be found. Frank Haxel says he kept hearing a voice between the buildings calling out something. Greg disappearing into thin air is common, so nobody thought a thing of it.

But just as everybody was ready to leave, Greg limped onto the street. His glasses were broken, his clothing ripped, and there was blood everywhere. Turns out he'd fallen into a window well along the side of one of the buildings, but nobody could hear him or come to his rescue.

"He looked like walking death and he was babbling a bunch of gibberish," Frank said. In other words, Greg was being Greg.

One of our friends, a firefighter, checked him out to make sure there were no serious injuries. We are still not sure how he fell into the window well, which was quite deep, and we are not sure how he managed to climb out, but maybe G-Dawg just used his super powers.

Greg couldn't find his phone and was quite upset. Somehow they managed to get him home. The next day he went back and checked out the window well, and found his phone. The phone case was cracked, if I remember right.

If G-Dawg is out and about again Saturday night, I hope he simply wears a lampshade on his head at One while watching the Cheeseburgers (that's another story) and not falling into window wells. But we'll help him out if we find him.