No more vinyl at SSM

A FEW YEARS ago, Sheryl bought a large vinyl record collection from a relative. Then we got another large batch, and we set the records up in our two front rooms. 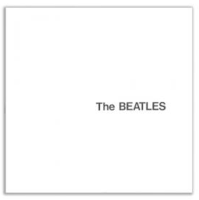 We sold more than a few. We also found some rare gems, like the Beatles White Album. After a while we found fewer people coming in to look at them, especially since there was still some great stuff in there. A slow dribble of customers made the vinyl room sort of a waste of space.

The other day a guy came in and offered to buy the remaining records - We probably had 7 boxes left. He and Sheryl worked out a deal and let's just say he is happy. But so are we - two new rooms just opened up and we can clear the vinyl out of our inventory records.

I'm thinking office space or maybe an amp room, where you can try out a guitar or amp and let it rip a little bit. I used to use the space to give lessons, but we have two nice rooms in the back now.

We have a few great albums for our own collection and hopefully we can spin a few during Christmas, just to stay in the vinyl groove. GUH. So don't needle us about it. We have more stuff up our sleeves ....
Posted by Rodney Hart at 10:59 AM