Rogue One - Everybody Dies

WE SAW THE new Star Wars movie, Rogue One, last night. It was really good and I highly recommend you go see it. Several people in line said they were seeing it again for the second or third time.

Before we go any further, I will warn you that this post about the new Star Wars movie contains spoilers. But before I spoil it, here's a preview of another movie. And another movie. And another preview about other movies coming in June 2017! We must have sat through half an hour of previews. And they were all sequels - shouldn't Vin Diesel be dead by now and shouldn't there be a law about how many Fast and Furious movies you are allowed to watch or even make?

We got 3D glasses with our tickets. No wonder they were $9 a pop! I thought about the popcorn and drinks but I want to go to the movies again soon and buy groceries and pay my mortgage, so I refrained. 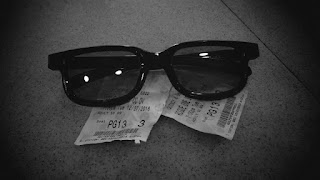 I didn't really like the 3D part and I don't think it added a lot to the movie. In fact, it made it darker and some scenes harder to watch. Star Wars is all about sensory overload anyway so the 3D part is overkill. At least we got to keep the glasses.

I'm not going into the plot in great detail, but it made sense and tied up a lot of loose ends. Rogue One immediately preceeds the original Star Wars movie and tells the story about the rebels obtaining the plans for the Death Star.

Here's the thing - like the first Star Wars movie, where Han Solo and Luke Skywalker avoid the bad guys with death-defying flying and risk-taking, this movie is full of heroics and courage and fighting for your life. But unlike Han and Luke and Chewbacca, everybody in Rogue One dies. And I mean everybody, even the droid. The main characters accept this fact and don't try to duck it, and realize their efforts will continue the rebel cause. And make George Lucas even richer. So it all makes sense, in the end.

Darth Vader makes a brief appearance. He's taking a bath at first, then chokes out the director and kills a bunch of rebels with his light saber. But he doesn't get the stolen Death Star plans. C-3PO and R2D2 are briefly shown, as is the guy who counts down the Death Star laser blasts (the original actor died 20 years ago and was hologramed into the movie, apparently). Even Princess Leia is show at the end, which was kind of freaky considering Carrie Fischer died yesterday.

So go see it, if you are one of three people in this world who haven't been yet, go. It's two hours and 15 minutes of escapism - or nearly nine hours, if you count the previews.
Posted by Rodney Hart at 10:29 AM