Cleaning means remembering some of it 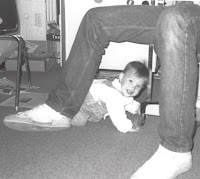 I'VE BEEN CLEANING out boxes of stuff looking for my Canadian citizenship card. One of these days I will stumble on it. In the meantime, I have several large garbage bags for stuff I'm throwing away from years gone by.

For some reason I saved a lot of my Alpena News columns and stories. I saved virtually nothing from my days at The Whig, mainly because most of it was archived and most of it (crime and courts) I don't want to relive, anyway.

I found all kinds of documents and photos from the Alpena years, 1989-96. One picture shows me on a baseball field talking to a bunch of kids and coaches. I can't remember the event at all. I'm in a lot  of softball team photos ("Mike's Bar Champs" doesn't ring a bell). Here's Emily in my old office crawling under my desk - now I remember I used to walk her down to the office in the afternoons so she'd fall asleep.

There's a photo of me and Mickey Redmond, the legendary Detroit Red Wings player and announcer, at a charity softball game in Alpena. The Wings came up several times to play golf and softball. One year I was the Alpena Area All Stars manager. I remember some wild nights with Sergei Federov and others, but I don't remember the games at all. I talked to Mickey Redmond? It was pretty cool, even though I don't remember it.

We had three Gus Macker tournaments in Alpena (93, 94, 95). We had 750 teams each year. Geesh! These were the glory days of Gus expanding across the country. I was a member of the Macker Backers in Alpena and they were awesome tournaments. I think. I remember being chased down a street late one Sunday afternoon by a bunch of mad parents after a bitterly contested game I reffed, but that's about it. 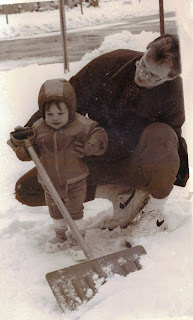 I saved the columns but tossed most the game stories, features and previews. I remember a lot of games, but I've forgotten a bunch, too. Apparently my buddy and neighbor, Mike Wojda, coached his Hillman Tigers in a Class D football playoff game. It was in Indian River. There was a lot of snow. Hillman lost on a last-second Hail Mary pass. How can I not remember that? My name is on the story and it's pretty detailed, so I must have been there.

Sometimes you have to read something to jog the memory. Apparently I helped my neighbor, Max Lindsay, put up a basketball hoop for his son Eric and his buddies. I wrote a column about it, and it might be the best column ever. I laughed out loud five times when reading it - now I remember the adventure of putting it up, and Eric looking at it and saying, "Great. Let's play hockey guys!"

It's a trip down memory lane, what little I remember of it. My overall impression is the seven years in Alpena were awesome, and I still miss the little town in Northeast Michigan, if not the nine months of winter.

I have the newspaper clips to prove it.
Posted by Rodney Hart at 12:41 PM