THERE ARE HIGH school football teams in our area moving games from Friday night to Saturdays because there aren't enough officials. That's right - you can't play the game unless you have refs. The Whig broke it down in this excellent article, and it's a tough deal all the way around.

I've often thought about getting registered for hoops and football, even umpiring. My excuses are that I play in four bands, I work at The Whig in the sports department and I like quiet Friday and Saturday nights every now and then. Excuses, I know. 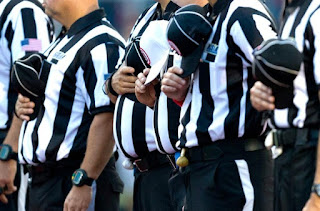 After working for Gus Macker in Burlington, Iowa, this past weekend, it again amazes me the amount of abuse officials take when trying to do their jobs. This was a first-year tournament and the local organizers did an excellent job, but we were shorthanded for court refs, and we scrambled. I ended up doing about a dozen games, and most of them were OK, but a few weren't.

It's not my fault your player elbowed the other player in the throat on the way to the basket, and I called an offensive foul, and you got all bent out of shape and told me I was terrible. I'd advise you to jump in the Mississippi River (it was about 30 yards away) but then you'd get even madder.

What I always say about events like Gus Macker is that 99 percent of the parents and fans get it. But it's that 1 percent causing all the problems. There were a couple of dads coaching 10-year-olds on one court getting way bent out of shape at their kids, and they tried yelling at me a few times, but it was windy and the PA system was really loud and I couldn't hear them, and when they realized I couldn't have cared less about their ranting, they gave up and yelled at their kids instead.

I wonder if this is why we have a lack of high school football officials. You are going to take abuse, no matter what you do or what teams are playing. Is it worth that $70 to get yelled at all night? Sheryl says this is exactly the reason we have a shortage of substitute teachers in the school district....

So the next time you are at a high school football game, and there's a call you don't like, and you start jumping up and down and hollering, stop for one second and think about it.

Nah. Keep yelling. Maybe we'll find enough officials someday to do all the games.
Posted by Rodney Hart at 10:27 AM