THE DISTRICT HAS been approved by the city to have sidewalk sales on Saturdays in August. We think this is a great idea, and I'm already thinking of things to put out there. We have a lot of stock right now and a special on bass guitars and amps (10 percent off this month), so we'll put some stuff out and see what happens.

I have a guitar or five I could sell. Which one, or ones? This Saturday. Fifth and Maine. Be there. I'll have them priced to sell. I have a couple of amps, pedals, and who knows what else I might be able to find. We'll rock starting at 10 a.m. as long as there's shade and the weather is decent.

The city does have ordinances about sidewalks. There are some businesses down here that blur the line, and I can see why the city has rules. On the one hand, it's cool when places like the Tap Room and our own Electric Fountain Brewing put tables out and dress it up - EFB has some nice planters and even a bike rack. But they had to get a special permit for those. It is all about keeping things clean and accessible. 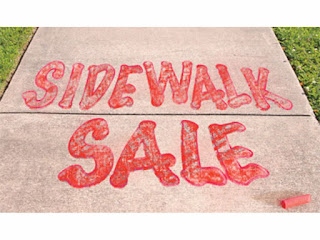 The other night I drove past the new bar on Maine, Joker's Lounge. There were some chairs out and there was a spirited game of bags going on, and I thought it was a great way to advertise the bar.

Other businesses tend to put out .... well, stuff. It makes the sidewalk look a little junky, to be honest. There's a fine line between creating a street vibe and making it look messy and unorganized.

Anyway, come see us Saturday morning, assuming we survived another epic Blues In The District on Friday night. We'll be on the sidewalk for that, as well.
Posted by Rodney Hart at 10:51 AM