CHRISTMAS USED TO be a huge deal at Fifth and Maine. Every year Santa would arrive and set up shop in Washington Park, and the crowds were huge. I've seen some photos recently on the Facebook page "You know you grew up in Quincy IF ..." and the throngs are impressive. 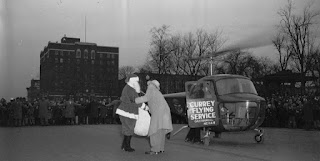 Check out this photo from 1948, courtesy Brian Winking and the You know you grew up Facebook page. Santa arrived at Fifth and Maine in a helicopter, and in 1948 that was a big deal. Shoot. It would be a big deal now. Look at the crowd! Perhaps Santa was more popular back then, but really, we need Santa more than ever in our day and age, so here's to hoping he still draws a crowd.

We've had a lot of people say Santa used to hang out in our building if it was too cold in the park. I'm not sure if this was before or after Mercantile left our space.

Last year The District decided to have a light the park event, and it was really good. Hundreds packed into the area around the gazebo and the park lit up right at 6 p.m., and it was quite festive. We are doing it again this year on Nov. 24, Thanksgiving weekend, and The District is raising money to put the lights back in the park again.

We are all for it at Second String Music. Light up the park! It makes coming downtown more enjoyable and a destination spot, not just a place to shop.

I know, I know, quit talking about Christmas. It's still two months away. After all, we still have to do Halloween and the Trick R Treat event Saturday at Second String Music.

Wait a second ... Christmas is ONLY two months away? We'll be ready at Fifth and Maine!