THERE IS A missing chicken in the Calftown Hood. It's name is Fraggie. It lives near 9th and Jefferson. Let's hope it doesn't try to cross the road, just because it can.

We have a fair share of chickens in our Hood. Just down the alley, Tony and Mary Dickerman have a coop. Their chickens don't venture out much, and never at night. They get a little mad when Mary and Tony leave, but you rarely hear them and they also make delicious eggs. 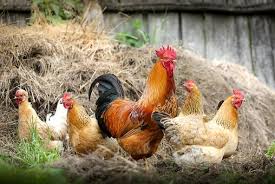 There are a lot of predators out there, and I'm not just talking about our new neighbors who blast horrendous music late on Saturday nights in their garage. If computer-generated techno beats won't kill chickens, nothing will. There are cats, dogs, hawks and assorted wildlife who would like nothing better than a late night snack.

I'd volunteer our dogs to go look for Fraggie, but it wouldn't be a good idea, especially for our English Shepherd, Genie. She is the sweetest and most docile thing until it comes to squirrels, moles and chickens. We sent her to a Missouri farm for a while and the owners trained her well but said Genie kept killing their chickens. The guy even tied a dead chicken around her neck as punishment, and Genie came back a lot better behaved.

But she'd still kill a chicken if she had a chance.

Fraggie's owner says Fraggie has a twin who is "lost without her." What? Twin chickens? Twin separation anxiety? Maybe Fraggie's twin can telepathically communicate and they can find Fraggie. Maybe.

I don't mean to make light of this. Pets are pets and a missing chicken is not a good thing, and the longer it's gone the less likely it is to return. I'll keep my eyes peeled and hopefully we find it soon.
Posted by Rodney Hart at 12:24 PM