WE SEE A few bicycles ditched in our Calftown alley. They've been stolen and discarded. In the hood we call this "hitching a ride," and it's a lousy thing to do. 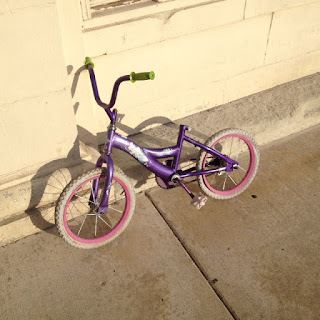 Some of the bikes are nicer, some have seen better days. Stealing a bike means you are a lazy person who has no regard for somebody  property. A lot of the time it means the thief is on one end of town and needs to get to the other, so they "borrow" some wheels and leave it somewhere when they have no further use for it.

The other day a children's bike was discarded in front of Second String Music. As you can see by the photo, this just doesn't make sense. There is no seat, one of the tires is flat and the chain is all messed up.

How did this thing end up on our sidewalk? Was somebody so hammered that they didn't even realize what they stole? Did they take the bike apart after stealing it? Did it fall off of a moving truck?

It's a sad thing, this messed up bike. It's sitting on our sidewalk as we speak. It will disappear eventually. Or maybe you know who the owner is ... just let them know.

And if you stole the bike to hitch a ride, shame on you. I hope you tried to sit on the seat and didn't realize it was missing until it was too late.
Posted by Rodney Hart at 9:55 AM