SHERYL IS TAKING a break from social media. She's suspended her Facebook and Twitter accounts. I'm probably going to get rid of my Twitter feed too since I rarely post anything and I don't read it that often. 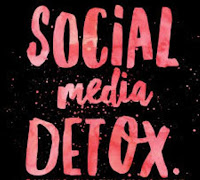 Twitter is full of angry people who spout the first things that come to mind and don't bother with facts. Buh bye, liars and idiots. Sheryl follows several people that are 20 minutes ahead of the news cycle and well researched. Of course it is very addicting too.

However, we realize the power of social media, especially Facebook. So we will remain active with the store and my Facebook pages, for now. She will also moderate What to do in Quincy IL via our Second String Music page.

We are way too dependent on these methods of communication. Not long ago we had a person asking all kinds of questions via the store Facebook, and it would have taken two minutes in a phone call versus an hour of garbled back and forth online.

I'm far more likely to return a phone call or even email.

You can always call or stop by, you know. The whole person to person thing is not overrated. We'd like to see you and talk to you in person, at least once in a while. The irony is that I'm doing this on an online blog, but it's an effective way of reaching people and gets a lot of traction.
Posted by Rodney Hart at 9:50 AM