HARTLYSS IS PLAYING Thursday night at the Adams County Suicide Prevention Coalition's Cocktails For A Cause. It's at Revelry in Quincy, and it features local celebrity bartenders and a silent auction.

You know our feelings about playing benefits. We don't do them, unless we are hired or it has a special connection. 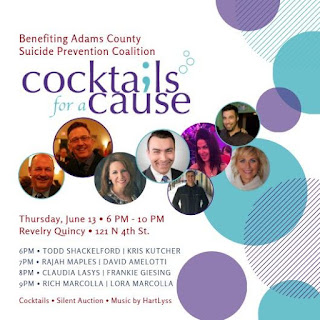 Last fall Cori and I played at a benefit for somebody we didn't know and it was a disaster. It was too cold to play outside but we did it anyway. There was a misunderstanding about how long we were playing and using our PA. They paid us but I gave it back because the organizers were ticked off, we were ticked off, and it just wasn't worth it.

Last Saturday we were in Camp Point to raise money for Camp Callahan. We were hired, and we were treated very well. I hope things worked out and they made some money for a very worthy cause, but I don't apologize for doing the job and rocking our butts off.

It's been said a thousand times, but we don't do this for the money. Sure, it's nice to get paid, and these guitars and guitar strings don't grow on trees. I played about 15 gigs with HartLyss before getting my Bose PA paid off. I think we get what we are worth, and I'm grateful to the local establishments for supporting live music.

But if you don't love it, you won't last very long.

Thursday's event is special. My brother, Greg Hart, took his own life in 2002. It shook our family to the core and ultimately led us to a better place, but I wasn't a very good brother and there is still a lot of pain and regret when I think of Greg.

So Thursday night, I'll do it for Greg, and I'll do it for the people left in the wake of senseless tragedy. The organizers have direct connections with suicide and the aftermath. If we can reach one person, and tell one person things will be OK and there are better options, well, we've succeeded.

There will probably be a lot of people there, but that's immaterial. I'm going to play my ass off, I'm going to have fun, and I'll think of my brother. And that's all that matters.
Posted by Rodney Hart at 10:47 AM