I WENT TO the Quincy Grand Prix kart races in South Park Sunday afternoon. It. Was. Awesome.

Kudos to Terry Traeder and everybody involved. It was a hugely successful event for many reasons, but it takes patience, attention to detail and commitment to pull something like this off.

I remember going to the South Park race in 1987. I covered it for the Whig and the late Gus Traeder couldn't have been nicer and it was a lot of fun. Then it stopped for many years until being revived last year. Gus passed away in 2016 and is buried right across the street at Greenmount Cemetery, and they put big finish line flags by his grave over the weekend, a nice touch.

A couple of buddies and I found a nice shady spot along the 12th Street side of the park toward the south end. We could see the karters zoom down the hill out of the starting blocks and negotiate the hairpin turns at the south end, then blast up the long straightaway across the park and up the hill. 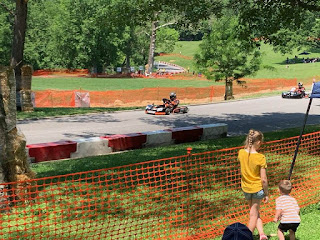 Adam brought out his canopy when the sun was directly overhead. There was a nice breeze and conditions were perfect. If you have an outdoor event in Quincy, make sure you can sell or have beer and strike a deal with the weather gods, and you will be successful.

I had way too much fun with the Cheeseburgers and HartLyss on Saturday night at the Camp Callahan Summer Jam in Camp Point, so I was content with a nice stogie, crushed ice and corn dog. Save for the obnoxious family throwing ice cubes at each other in front of us, it was perfect.

There were tons of vendors, plenty of strategically placed trash cans and portable potties, and you could even hear the PA announcements.There was only one crash (out of our sight) and the organizers were right on it, getting to the drivers right away and making sure the track was OK to continue racing.

If I know Terry and the people involved, South Park will be far cleaner today than when they arrived a week ago to set up.

What a great event for Quincy! I think it would be a fun venue for a concert on Friday and/or Saturday night, too. Hmmmmm .... dare to dream, and here's to 2020 and beyond for the Quincy Grand Prix.
Posted by SheyFey at 9:33 AM