SHE CAME INTO the store about noon. She is in her early 30s but looks twice as old. Living on the street for a decade or more will do it to you. Sheryl was running errands so it was just me in the store, and I immediately seized up.

"I haven't eaten for five days," she said. "You helped me before. Could you help me now?"

Many years ago I encountered her near Sixth and Maine. She looked a lot different back then. She was hungry, she said, and asked for a couple of dollars to get a hamburger. Instead, I took her to the coffee shop and lunch place then inside the Granite Bank Gallery. I bought her lunch and listened to her story. I think I even wrote a column about it. But it was a long time ago.

I've seen her many times since. She's been in and out of jail, battled substance abuse issues, been physically abused, and probably had worse things happen. Lately she's been wandering downtown and yelling into her phone, which I don't think works. She is battling demons most of us will never see and experience, thank God. I think the technical term is schizophrenia.

She came into the coffee shop next to us twice last month. Both times she said it was her birthday and asked if she could have a cup of coffee. Two birthdays. In the same month. They had pity on her and gave her coffee, which is no big deal.

Yesterday she said something getting into a fight with her "dos." I thought she meant dose, as in medication. "I'm not taking any medication," she snapped. "My dos. My double. My twin sister. I can't call her my sister, you know."

She's homeless, staying here and there. What about a shelter or food pantry? "Most places have kicked my twin out, so I can't go there," she said.

I felt really uncomfortable. It was just us in the store and all I could think of is her accusing me of something. It's the world we live in and I hate it, but it's reality.

I told her I wasn't giving her any money, and there wasn't much I could do. She stood there. I think she realized things weren't going to go much further. I finally gave her a bottle of water and she left.

Was there more I could have done? Do I have a degree or experience in helping people with mental issues? The answer to both is no but I am a musician and teach people how to play guitar. That probably would not have helped. 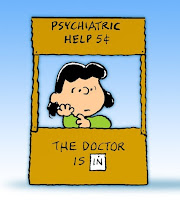 How does this happen? How does somebody go so far off the rails? And how do we take care of people like this?

It twists my brain and the more I think about it the more it screws me into the ground. My lack of sleep last night pales to her getting by, one day at a time. Sheryl has been losing sleep over the immigration camps on our southern border. We are both a mess.

Getting help with mental health is a massive issue in this country. Joe Schmo on the street is not a substitute for mental health care.

It leaves us all in a precarious situation.
Posted by Rodney Hart at 10:13 AM