UNLIKE MOST FOLKS in Quincy, and assignment editors ("We have TWO live reports right now for you!"), snow is just snow to me. It helps fill front page space and floods Facebook with one-word redundancy.

It's snowing. Slow down. The world is not coming to an end, hopefully.

So we open the store this morning and who comes tromping in but the legendary Frank Haxel. Second String Music bought some bookshelves from our friend Char Stocker, who is closing Great Debate Books down the street after this weekend, and Frank is here to help.

It's snowing sideways out. That doesn't matter to Frank. "It's hardly sticking. Let's get 'er done," he says.

We slush a block up Maine Street. We load up the shelf. We are walking west up Maine and crossing the driveway of the Maine Center when a little blue car comes out of the parking lot toward us.

The, uh, experienced gal saw us at the last second and missed hitting me by inches. Then she gave me a dirty look, something like, "Well, why are you moving bookshelves up the street in a blizzard?" 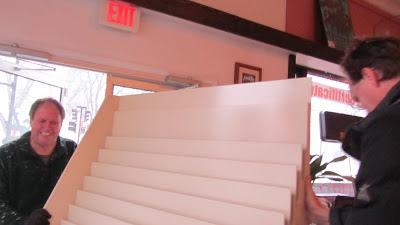 We make it to the store, and not only that, we went back and got two more. Really, it wasn't so bad, just like moving a 75-year old cement-filled piano from Hannibal to Quincy wasn't so bad. GUH.

Now we have bookshelves in our back storage area, which might be used for room dividers should we put lesson rooms back there. One of the bookcases is being used for amps. "Sheryl will just move everything around later," Frank said.

You know what? The snow is blowing sideways, we are comfy inside Fifth and Maine with Fast Eddie and lots of cool guitars to play, Led Zeppelin is Ramblin' On and life is good.

And we have stuff to put on bookshelves. After they dry from being in a blizzard.