YUP. THERE IT is. The media, using words like "furious" and "massive" and "dumping" and "I'm overwrought so let's put it in a headline."

Nine inches is a lot of snow for Quincy. We shut down early at Second String Music yesterday, got a push to get out of our parking spot, and made it home without problems. Ah, the advantages of living a mile away.

There were lots of people stuck in vehicles through no fault of their own, but a lot of folks simply don't know how to drive in the snow, shouldn't be driving in the snow, and shouldn't get all bent out of shape when they skid or can't move. 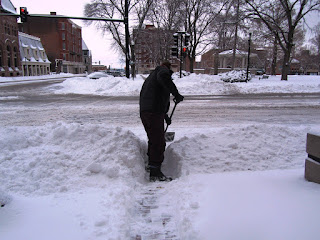 My friends Laura and Justin Sievert soldiered out and helped at least a dozen people, including two Quincy Police officers. One was stuck in the middle of the street at 12th and Hampshire. Quincy is full of good stories like this and we need to hear more of them.

The best story is about a guy who stopped to help out a woman stuck on the side of the road. Another vehicle rolled up behind his car, and the driver yelled at him to get out of the way.

He calmly walked back up to her car, took out his Illinois State Police trooper badge and asked if he could help her.

I would of thrown a snowball at her.

So, chill out, dig out and enjoy and beauty of a late winter reminder. I'd love to talk more, but I gotta finish shoveling the sidewalk in front of the store. Peace!