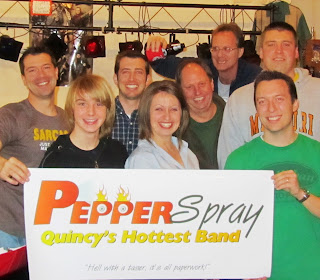 SATURDAY MORNING MUSINGS as the cobwebs clear and we continue to rock and roll at Second String Music ....

- Had an epic jam session last night with the Pepper Spray crew. We play this Wednesday at One Restaurant, Sixth and Hampshire. Here's how it works - "Tim, you start. Laura, you are next. What key is it in?" A big thanks to Frank Haxel for the poster, too.

- Tucker has fit right in with us and has gained a whopping 15 pounds in two weeks. He and Bella The Destroyer are running buddies on our daily outings, while Lucy trots along and ignores him. The other day Tucker ran up to a four-foot high pile of brush and simply jumped right over it, which explains how he's gotten out of our fenced-in yard a few times. Fortunately he hangs around and comes when he's called. He's even rolling over so Sheryl can give him belly scritches. And he loves hanging out at the store. 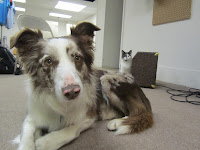 - Congrats to Darla Pullins, named the Exchange Club Officer of the Year Friday. The QPD patrol officer helped save a guy who wanted to jump off the Mississippi River bridge last summer. She is a very deserving winner.

- Our big two-year anniversary party for Second String Music one week from today, and we'll have music, food, hydration and some big announcements all day long. Hard to believe it's been two years. We can also show you a startling discovery back by the old bank vault.