Prepare to be Sprayed

IT'S OFFICAL. THE gang of ruffians who jam every other Friday at Second String Music make their formal debut as the band Pepper Spray on Wednesday, Feb. 20th at One Restaurant in Quincy.

We've had regular jam sessions at the store ever since we opened. This will be a mostly acoustic group covering a variety of genres, from country to bad 80s hair metal to original songs.

The name came from Quincy Police Sgt. Adam Yates, The Mighty One. After a particularly hydrated jam session, the gang was at Mr. Bill's getting something to eat when the talk shifted to Tasers.

"I'd much rather use pepper spray," said TMO, the drummer and singer for Quincy band Reasonable Doubt.  "It's easier and there is less paperwork."  So Pepper Spray it is. 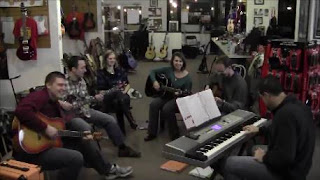 Pepper Spray consists of Laura Sievert on guitar, her husband Justin Sievert on guitar and bass, Adam Yates on keyboards and harmonica, Adam "Frankie Blue Eyes" Duesterhaus on percussion, Tim Smith on guitar and me getting in the way with high kicks and pilates moves. We all sing and have more fun hooting and hollering than should legally be allowed.

Tenille from One Restaurant invited us to play on a Wednesday night, and it's the perfect venue, a nice stage and PA and a relaxed atmosphere. There are many songs where just one or two of will play, and you will be just as likely to hear Bob Dylan as The Cars.

Since Justin's nickname is "Justin Jukebox" and Tim knows every country song ever written, we might take requests and sort of plan it out.