YOU NEVER KNOW who will stop at Second String Music when we are having a Happy Hour jam session. 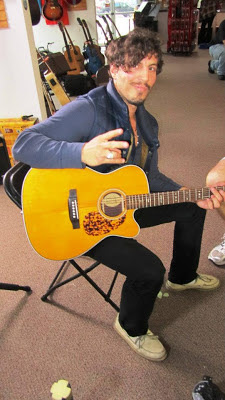 We are cruising along when I see this guy come up and start playing a shaker. He's very cordial and way into what we are doing, which is sitting around with acoustic guitars and making noise. Then somebody says, "Hey. You are Josh from Steel Magnolia!"

Yup. That's right. A guy who has played the Grand Ole Opry, opened for Bob Seger and is making waves in country music is in our store, and all he wants to do is jam.

Steel Magnolia was in town last night at a club and Joshua Scott Jones was wandering around when he saw us playing. He kept trying to get up and leave and we kept making his sit down to play, until he finally gave us a lame excuse about getting ready for the gig, or something like that.

He couldn't have been a nicer or more humble person.

Here's a guy who has played in front of thousands of people, but after sitting in with us and playing everything from Bob Dylan to Tom Petty to Eric Clapton, he said, "This is what it's all about."

Thanks for hanging with us, Josh!