IT'S GUS MACKER weekend in Quincy, one of my favorite times of the year, and there are lots of memories.

I worked for Gus for seven summers all over the Midwest and had a lot of interesting, strange, hilarious and downright hair-raising experiences. I'd do it all again and maybe I'll get back to traveling with the circus if the dust ever settles in the Q-town.

I have friends for life because of working for Gus. My buddy Jason is the foreman this weekend and is already in town building baskets. I met some amazing people, including the Energizer Bunny himself, Scott McNeal, aka Gus Macker. The guy woke up with steroid toothpaste at the crack of dawn and never stopped until his phone died at about midnight.

I will be calling games on the Dream Court, right outside the Second String Music doors at Fifth and Maine. Quincy was the first tournament to have a Dream Court, where kids are taken off their regular courts and we play on a special surface, with starting lineups and announcers.

Emily played in five or six Mackers with her buddies. The pic up top just makes me smile. As you can see by their team name, No Weak Treats, it didn't matter how they played or how many games they won or lost. They just wanted a treat after they were done.

And that's what I remember the most. 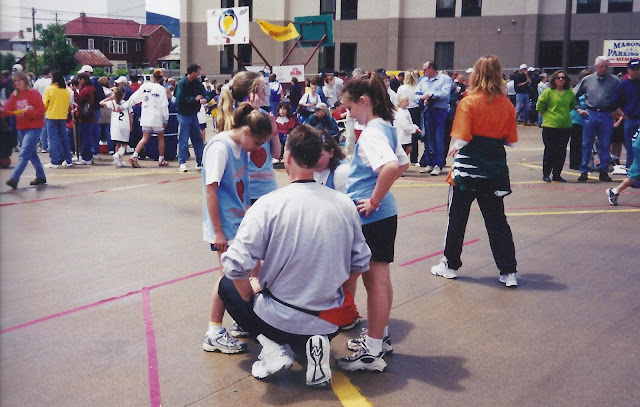