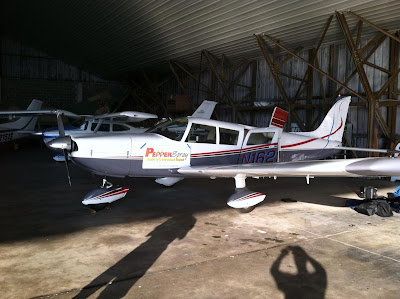 THERE IS THIS band in town called Eleven, and they are awesome. They even have a great big bus with their logo on it. It makes them The Bomb.

As you can see in the above photo, we now have a plane. Yup, the Pepper Spray plane. Pretty sweet, ain't she?

Actually, the plane belongs to Pepper Spray member Tim Smith. He took me, Frank Haxel and The Mighty
Adam Yates to Michigan Sunday, and we spent the day and night on my Uncle Peter's Lake Michigan beachfront near Holland.

The three boys had never been to Michigan, let alone the big hole in the ground full of water, and they loved every minute of it. We had an awesome jam session on the deck after dinner with cousins Michael and Roland. Their kids enjoyed hanging out with goofy Uncle Rod's friends, and there was an epic Goony Race on the beach (see video below).

As the boys found out, there is something soothing and therapeutic about simply sitting on the beach in the sun with a beverage and enjoying good company and conversation. We are doing this again next year and might try to extend it a day or two, cuz a little fun in the sun just isn't enough.

It took us about two hours to get there. Two hours! I am used to the seven- to eight-hour drives battling Chicago traffic and arriving completely exhausted. Tim is an excellent pilot and the flight was smooth most of the way.

A huge thank you to Uncle Peter and Aunt Helen, and cousin Amy, who insisted we make the trip. Roland and Amy, Michael and Natalie, the kids, everybody .... It. Was. Awesome.

And we can't wait to do it again!