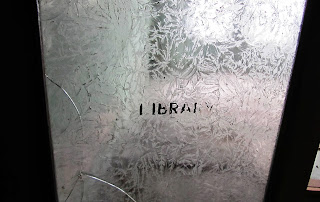 WHILE RESEARCHING THE history of our building, I learned that the Schmiedeskamp law firms called Fifth and Maine home from about 1914 to 1962. They were known by various names and there were two brothers, Carl and Henry.

The  brothers split up and they were on the fourth and fifth floors by the late 1950s, and gone a few years later.

Schmeideskamp is still in Quincy, a block away, across the street from our public library. 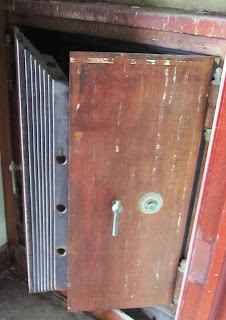 On the fifth floor tucked away on the far west end is a safe. If you shine a light on the panel, you can still see the name Schmiedeskamp & Wilson. They likely put valuable legal documents and perhaps cash/checks in the safe. It was made by the Mosler Safe Company, now defunct. The huge safe door in the basement used for 55-plus years by Mercantile Bank is also a Mosler.

It's about four feet high and four feet wide, and it rests on wheels inside a wooden cabinet. The owners likely decided it was more trouble than it was worth when they moved.

I am interested in preserving the safe. It might be worth a small fortune in scrap metal, but some things are more important than cold hard cash, even with a cold hard mortgage payment looming every month. Gulp.


What do you think? Leave it? Sell it? Scrap it?

Ahhhhhh ... the joys of owning an old building!
Posted by Rodney Hart at 10:44 AM