WE WERE LUCKY. All we had to do was deal with a busted window.

The folks in Washington, Ill., can't claim the same. Prayers go out to the central Illinois town, which took the brunt of a nasty tornado Sunday.

Sheryl and I were called by our alarm company and our local police department at about 11:30 Sunday morning because a large window blew out on the Maine Street side of Second String Music. Maine Street is a wind tunnel anyway because of the large buildings on either side. We also lost a smaller attic window on the Fifth Street side. 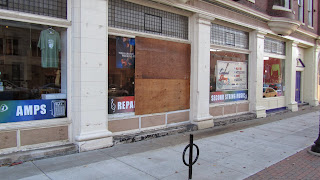 A big thanks to Quincy Police officers Luke Humke and Bryan Martin, who kept an eye on things until we arrived and made sure we were okay. Poor Frank Haxel, in the wrong place at the wrong time again as usual, came down and helped us board up the windows.

Sheryl, of course, was worried about one thing and one thing only - Fast Eddie. Frank found him cowered in the corner of a back storage room. Sheryl insisted on taking him home, where he prowled around the basement and antagonized Bella all night.

We swept the glass up and the window guys are here now. It's all part of the adventure of living and owning a business in the great Midwest - you never know what is around the corner with the weather.

Sheryl posted a Glass Smash special on our Facebook page. All amps are 10% off this week. Any amp with a glass shard flaw is 15% off. There is also a ddrum Heavy Hitter drum throne that sustained a bit of damage. It is 30% off due to the now slightly ripped seat cover.


We were lucky it was only the amps and we are grateful we only have to replace a window pane.
Posted by Rodney Hart at 10:16 AM