New Asia, and going back in time

ASIA HAS RELEASED a new CD called Gravitas. The first song is out and while the video is awful, the song, Valkyrie, is quite good.

Asia was the first band I saw in concert, exactly 32 years ago, and the old Grand Rapids Civic Arena. I'd never seen anything like it - we were up front and the sheer volume, showmanship and spectacle was overwhelming.

Asia's first album was incredible, one great song after another. It was the top-selling album in the U.S. when the band came to Grand Rapids. I still enjoy listening to "One Step Closer" and "Only Time Will Tell," among others. I'd listen to it Time and Time Again, and never get tired of it. I still know most of the words and arrangements. 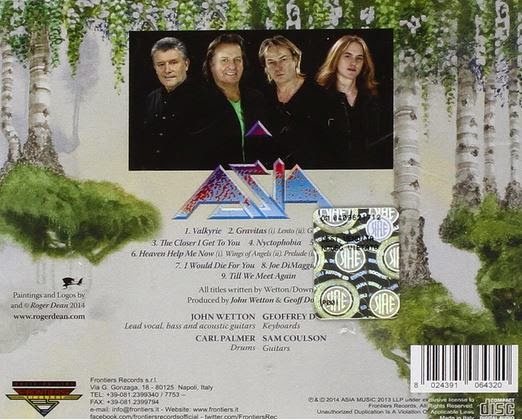 Then Asia came out with Alpha, and it was ... disappointing. Guitar player Steve Howe seemed to be left out of a lot of songs. You could tell something was wrong. They were supposed to play that summer (I think it was 1983) in Charlevoix, and I got great seats, but they canceled the show. Then John Wetton quit. And that ended my infatuation with the band.

I still bought the next album called Astra. By then, Howe was gone and was strangely replaced by hard rock guitar player Mandy Meyer. Krokus was a very cool early 80s hair metal band ("Eat The Rich is a classic"), but he was out of place in Asia.

They went through a bunch of lineup changes and versions, and became Spinal Tap-like with so many people in and out.

Asia reformed the original lineup in 2006 to positive reviews. I almost got tickets for a show in Chicago, but it was too far. Now they've put out the new CD and have a new guitar player, the awesome Sam Coulson, and I'm intrigued.

I don't know. What do you think about an artist or band who you loved three decades ago, putting out new music? I never buy CDs of newer bands anymore, and I'm reluctant to even part with a few bucks for something I'm not sure I'd like.

I do like the new song though. They are planning a U.S. tour, and if they come anywhere close, I might go.

Maybe I'll give it a chance and buy the new CD.