It was about five minutes to 6 last Friday night, and we were getting ready to close the store. Fast Eddie came up to Sheryl and wouldn't let her be - he meowed and rubbed up against her and generally made a pest of himself.

Eddie was obviously trying to tell us something. When Sheryl went to the back to feed the cat and turn down the thermostat, she heard a strange noise coming from the former Dancer's Dream location, in the far east corner of our Fifth and Maine building.

She opened the door, and behold, a ton of water was pouring through the ceiling. Turns out we had a malfunctioning toilet in the second-floor bathroom, and the bowl was overflowing. 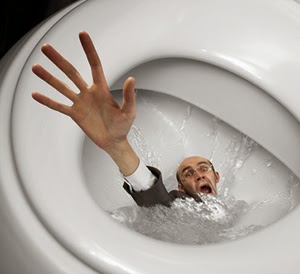 Sorry I called you a pest, Fast Eddie. You really were trying to tell us something.

We got the water turned off and had a plumber check it out Saturday morning. Now we need a new tank bladder because it burst - not frozen pipes but blocked trap and busted bladder. We had to get the expensive toilet! But it could have been worse - had Eddie not bothered us, or had the toilet overflowed 10 minutes later, it could have spent all night with the water running and flooding our first floor.

So. The moral of the story? Always listen to your cat. And check the toilet frequently, even if it's on the second floor.