Lincoln history right in front of us 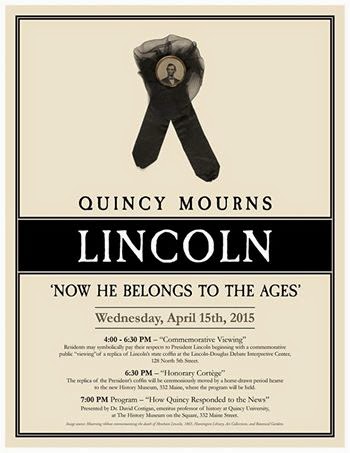 TODAY MARKS THE 150th anniversary of President Lincoln's assassination. Lincoln was well-known in Quincy, and one of his Quincy friends, Orville Browning, served as an honorary pallbearer at his funeral. Another Quincyan, Col. George Rutherford, guarded Lincoln's body and laid coins on the president's eyes after his death.

Ed Husar wrote an excellent article for The Whig about Quincy's reaction to Lincoln's death. The day after he died, more than 3,000 people gathered in Washington Park to mourn his passing.

Washington Park is right across the street from Second String Music. The spot where Lincoln debated Stephen Douglas in 1858 is marked with a monument. Pretty amazing, to stand where they stood all those years ago.

Tomorrow night in Quincy there is a reenactment of his funeral procession. It starts at The District office just down the block, and a horse-drawn hearse will go in front of our store and down to the museum at Fourth and Maine.

It's history right before us and a sad but beautiful way to remember one of the most famous men who ever lived.
Posted by Rodney Hart at 11:32 AM