THE QUESTION WAS asked by one of the moms - "Do you really think the girls can make it in Nashville?"

Of course I do. But there's a lot more to Sam Backoff, Sami Bearden and Savana Santos pursuing their musical dreams than meets the eye. Their group, Avenue Beat, has done more than most in a few short years. The three girls graduated from Quincy High School last week and are moving to Nashville in July. They have management and are writing songs with some heavy hitters. They are on the road to being famous, whatever famous means.

As long as they don't forget where they've come from, they will be fine. I think they have the right perspective. "Famous is famous and famous people get free food," is how Sami puts it. 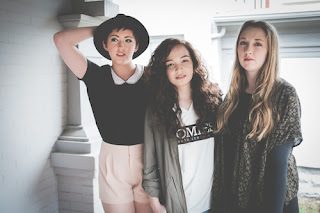 Hard to believe it's been three years since we saw them for the first time. They were at a music showdown contest at the Adams County Fair. Sami's microphone didn't work at the beginning of the song. Most young performers would panic and go off the rails. Not Sami, and not her two buddies. They shrugged it off and kept going. I remember thinking, "Who are these girls, and how did they learn to harmonize like that?"

Then we learned they weren't just into the usual country rubbish. They liked Elvis and Queen and Tom Petty. Yes, they swooned when hearing "Girl Crush" (they just wrote songs with the girl who wrote Girl Crush, BTW) and they did Ed Sheeran and Miranda Lambert covers. But Sami likes Broadway musicals, Savana is all over the place with her favorites and Sam is the same way. They defy a label or style. They swirl all over the place. They actually play instruments and write their own songs - no playing to tracks for these girls.

And those voices! Geesh. There is magic in the harmonies and they have no idea why it works, but they've worked hard at it and it's a beautiful thing.

They have great parents and stay grounded. They've stayed above the normal high school sniping fray and they don't worry about the things they can't control. They are regular kids and have a certain innocence about them - Savana just found her car keys and she's happy! But don't be fooled - they have a burning desire to be heard, and they aren't heading to Nashville to be pretty faces on a poster.

We knew they were serious when they wrote a song about a boy who treated one of them badly. They sang it at an open mic night right in front of the boy. Then they stared down at him defiantly. It. Was. Beautiful.

I think they can make it down there. The music industry is brutal and there are so many talented people sitting on street corners and dreaming of the big break. Will it happen for three girls from a sleepy little river town in Illinois?

I am not a betting man, but I bet they will, and have the times of their lives trying.
Posted by Rodney Hart at 10:43 AM