John Roope is back to playing, and living life

WE ARE FORTUNATE to have John Roope play Friday for our Blues In The District noon acoustic event. He'll be in the shade at Fifth and Maine from 11:30 a.m. to 1 p.m. There is no charge. You can grab lunch from the Butcher Block food truck and enjoy good music.

Truth is, John considers himself fortunate to playing for us, too.

Seven months ago, John was driving from Quincy to his home in Rushville when he suffered a stroke. He was actually able to make it home - "But when I got home, I couldn't get out of the car," he recalls.

John suffered a stroke and spent several weeks in the hospital. He can laugh now when asked if the stroke was "serious" or not.

"Well," he says, "I am doing a lot better than anybody has a right to." 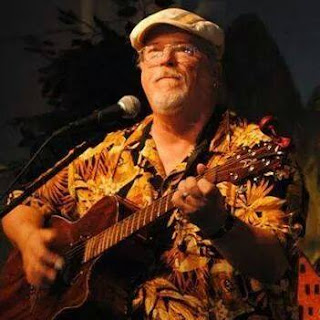 John works for Chaddock as director of Early Childhood Mental Health. He's resumed his speaking engagements across the state and has played a song or three during those talks, but this is the first time he's doing a real show. It was hard for him to grab the guitar and play chords - "It was like having a sunburn on the entire left side of your body," he says.

He still has issues with nerve pain and endurance, and "grabbing the right words out of the air," but he feels confident he can play a full show. "My voice is lower and raspier, and I can't really slide up on the guitar anymore," he says. "It's all right. I was never that good anyway."

I beg to differ. John is a good player and he loves performing. He'll be sitting, not standing, and he'll have a tablet to help him remember all the words, but I bet he does just fine Friday.

John is 60 years young. He learned to play when he was about 28 and working in the Chaddock cottages. He figured playing guitar would help him connect with the kids. He was right.

He played a lot in the Rushville area until the stroke hit. I hope he gets back into the solo acoustic circuit again.

"All of this just makes me realize I do get to live life again - I get to be me," John says.