LED ZEPPELIN WAS recently sued for allegedly copying a Spirit song for "Stairway To Heaven." The trial has started in California and it's utterly fascinating, click here for a really good review.

First of all, you are not allowed to play Stairway in Second String Music. We have a big poster saying so, a nod to Wayne's World. Stairway is the most overwrought and overplayed song ever. But that's not Led Zeppelin's fault. It was fine the first 2 trillion times we heard it. Again, not Zep's fault. 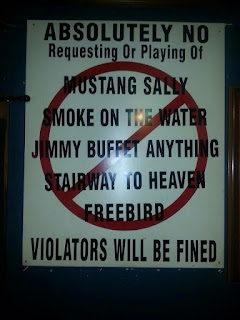 Listen to both songs. Are they the same? Of course they are! Did Plant and Page steal it for their own song? Ah. That's the question, and we'll find out what a jury thinks.

The amazing Nile Rodgers gave an interview recently and pretty much summed it up by saying we are all influenced by everything around us. You can't help but hear a catchy song or hook and say, "Man, that was so cool ... I wanna try that in my own song." Really, is there anything original out there anymore?

There are 12 notes in the chromatic scale and infinite chord arrangements and patterns. But humans and are humans. You can be influenced, but you can't steal intellectual property, just like you can't steal candy bars or cars.

I recorded three CDs of original songs with The Funions and had them all copyrighted, just for posterity. I'm not vain enough to think somebody is going to steal an old Funions song, but ownership is a cool thing.

In the spirit of song writing in general, I hope Zeppelin wins.