Summer heat on the way

The warm weather arrives today, just in time for Blues In The District tomorrow. Saturday features the Lincoln In The District in Washington Park, and Tim Smith and I (the Smart Brothers) play from 11 a.m. to 3 p.m. at the Dock Saturday as part of the YMCA Mud Mania event. 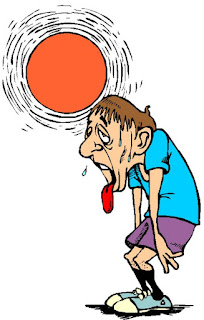 People around here tend to shrug off the warm weather. It's better than freezing to death, right? For people who work and play in the heat, it's a good idea to drink water and be smart. Liz Bentley kicks off our acoustic Blues In The District shows Friday at 11:30 a.m., and we'll make sure she's in the shade. We have some other great acts lined up this summer and the Butcher Block will be there for your lunch needs, so we hope you come join us in Washington Park near Fifth and Maine.

If you want to beat the heat, Avenue Beat plays one of their final shows in Quincy before the girls head to Nashville. Sam, Sami and Savana play Friday night at One Restaurant at 8 p.m.

Speaking of Fifth and Maine, The District just announced that Wine on Broadway will be delivering beer and wine before Friday's Blues In The District concert. They will be at Fifth and Maine, and you can call ahead for your order at  (217) 641-0417. Remember this is for ordering purposes only .... no beverages will be sold on site. Second String Music has taken advantage of Wine on Broadway's deliveries several times. Ahem ... it's a good idea to order in instead of drive out when you are having a store function!

Katy Guillen & The Girls of Kansas City kick off Blues In The District, and we can't wait for another summer of music and fun downtown. Be here or be square!