THE CHEESEBURGERS HAD a blast at the Adams Trading Post Saturday night. This is a little honky tonk  roadhouse about eight miles south of the Quincy Regional Airport, in the middle of absolutely nowhere. 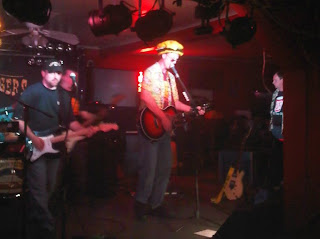 The customers are mostly locals but we had a lot of people coming in from Quincy and Missouri to see us. The great thing about a small venue is that you put 100 or 150 people in there, and it feels like you are playing to 5,000. The dance floor was packed all night and they had a great old time. The people make the gig, and The Cheeseburgers play better when the joint is rocking.

We had some feedback issues at first, and the on stage volume was too loud, and my mic quit working early in the first set. Didn't matter, and that's one piece of advice I always give younger musicians - just keep playing. Fix it on the fly and forge ahead.

Another piece of advice is to keep the show moving. Don't wait between songs. The crowd at Adams was ready to party and they didn't want to sit around while we figured out what to play. Get yourself a set list (Burt always puts it together and he knows what he's doing) and rock it out.

The stage is long but narrow, so we put the lights up right at my head level. That meant I couldn't see squat past the stage, but that's OK. At one point one of the patrons was requesting a guitar pick from me during a song but I literally couldn't see, until Burt yelled out in mid-song, "She wants a pick!" Ah. Sorry bout that, and glad to oblige.

We are off for about a month, and then it gets crazy again in the summer. Come out and Git Cheesey! It's more fun than should be allowed .....