A different perspective on tragic case

ED KOCH KNEW he wasn't coming back for a long, long time. He was in the store Saturday, two days before his sentencing in Nebraska. "I'm going away," he said. "It's going to be for a while."

On Monday, a Nebraska judge sentenced him to 15 years in prison for involuntary manslaughter. Exactly a year ago, Ed was driving a vehicle on a Nebraska highway when he hit the back of another car, and the two people inside were killed. The victims were 22 and 24.

Local media reported Ed was driving about 90 miles an hour. He had alcohol in his system. He told the judge Monday he was "self-medicating" and that he suffered from severe mental illness. He apologized to the families during the sentencing.

I don't know the victims, or their families. But everything else fails to compare to their pain and loss. This is not an attempt to minimize anything. Friends and families of the deceased have to live with this forever. So does Ed, though he got a chance to say goodbye to friends and family last weekend. The victims never had that chance.

I don't claim to know Ed that well, but he's been a good store customer. He's a very good guitar player and musician, playing in bands like Them Damn Stingrays. I hired Ed to play with Justin Haubrich at our noon blues concerts in July. They rocked Washington Park that day.

So that changes things. When I covered crime and courts for The Whig, 90 percent of the criminal cases involved a bad guy, a dirtball, a person you could loathe. It wasn't easy, shutting it off when entering the courthouse to report on a murderer, a thief, a sexual predator. But there was little sympathy and the focus was on the case, and the victims.

But what if the bad guy isn't really bad? What if he just made a serious error in judgement? What if he's just a regular dude like the rest of us? 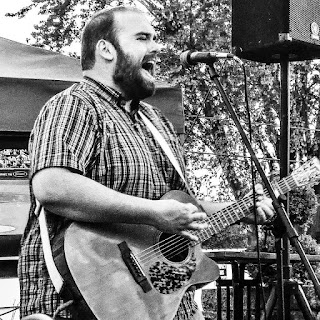 What if he's Ed Koch? You know, Ed, the guy who plays guitar at the open mic nights. The great guy with a big heart in little old Quincy, Illinois?

He's not a bad guy. He's not this evil, twisted monster we root against and hope rots in prison. He's the guy we know. And it's all too close to home.

If anything, take this away from the case of Ed Koch - there but for the grace of God go you and I. And the next time you have a few beers, and you get behind the wheel, and your wife or your friend says, "You shouldn't be driving," listen to him or her. And give them the keys.

Ed won't be coming back to Quincy for awhile. But the two people killed in the crash will never come home. And we know the guy who was sent to prison because of it.
Posted by Rodney Hart at 11:01 AM