IT WAS ANOTHER wild musical ride this weekend. I am amazed at how gigs vary and audience reactions dictate the flow and the go.

I saw a Facebook post from a local musician who was at a Kacey Musgraves concert in St. Louis, and he couldn't believe how rude people were during the show. Many were talking to each other and ignoring the huge talent on the stage. Hey, if you want to waste $50, so be it, and I couldn't agree more with his reaction. 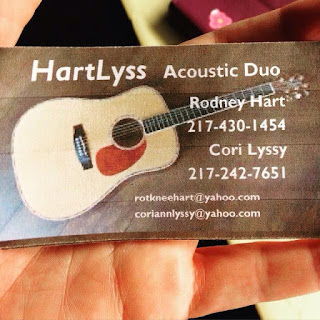 On Friday night, Cori Lyssy and I played at Cellar 21. There wasn't a huge crowd and it's a small venue, but the people there were into it and respectful. There was an amorous couple that kept it interesting, too, but I'll leave most of that story alone. We had a blast - I always do with Cori.

Saturday afternoon, I played the coolest solo gig ever. It was for the Yoga7even street party at Eighth and Hampshire. I played for an hour in the sun in front of a class of about 15 people doing Yoga, and at the end the instructor had everybody use a hula hoop. Great fun - Beatles and Buddy Holly songs go great with hula hoops! Again, it has nothing to do with the amount of people, it has everything to do with the vibe and environment.

Then came Saturday night. The Cheeseburgers played at a private party near Hannibal. I understand that we were paid to play, and I thought we played out hearts out. But it was outside, at night, in a field, and everybody either sat by a huge bonfire or chit-chatted with friends by the main building. Both were at least 50 yards from the stage.

It was difficult and the energy level on stage suffered, and it's my fault for letting it get to me.

I've written many times about being professional and not letting small numbers or indifferent audiences get to you while you are playing. And I appreciate the gig, and playing live music on a beautiful night with a bunch of great guys.

You know what? I'm ready to do it again. Every gig has a story, and when you get paid to play, you play your heart out, whether anybody cares or not.