SO THE QUINCY City Council has some aldermen who aren't happy with being "lectured" or "attacked" by our chief of police.

My take? Wah, wah, wah. Some of our aldermen are crybabies who fail to see the big picture. Our chief isn't happy with four officers being cut from his staff. He's trying to get them back. Our city council and especially our mayor are concerned with fiscal bottom lines. So guess which side wins?

Chief Rob Copley has always been media smart and maintained relationships with aldermen. But he is obviously getting tired of having less officers. The recent spate of gun violence has bolstered his pleas. 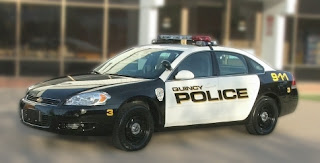 I'm not sure how much longer the chief has left to serve. He's done a very good job for a long time. Perhaps he feels he has little to lose now, and doesn't really care if he ticks off aldermen.

A few years ago I forgot to duck and I got assigned to cover a city council meeting. One of the aldermen, and he's still on the council, asked Chief Copley to step up patrols on a busy street because he was getting complaints of speeding.

After the meeting, the alderman came up to Copley and said, "Thanks, chief. Appreciate it. But please tell your officers to not write tickets - just issue warnings."

That's not the way it works, Mr. Alderman. You can't act like you are taking charge, then back off.

So here's your warning, city council - our chief is trying to do his best for his department and our city. I'd listen to him and put the hankies away if he is blunt. By now, it's about the only way he's going to get through to you.

And if you think he doesn't need more officers, and our city is just fine the way it is, so be it. Election time is always around the corner.
Posted by Rodney Hart at 11:22 AM